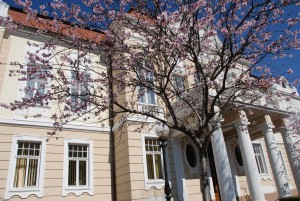 Lucian Blaga University of Sibiu is a public institution, established in 1990. The origin of LBUS as an academic institution is recorded in the first months of 1990, immediately after the overturn of the political regime in Romania – therefore LBUS is a young university.

LBUS academic structure is a pyramidal one, based on the bachelor, master and doctoral degree programs, as components of the three-tier Bologna system, in addition to postdoctoral and postgraduate training programs offered to those interested in Life Long Learning.

LBUS started to institutionally develop by assuming an open cooperation with the economic, social and cultural environment. It aimed at being an active member of the local community, involved and responsible for the well-functioning and well-being of the city (town and gown). It is worth mentioning at least several accomplishments in this respect: